Skip to content
Home/Uncategorized/Don’t let the cat out of the bag: keeping client lists confidential at all times.
Previous Next

Don’t let the cat out of the bag: keeping client lists confidential at all times.

Building a business and client-database is no easy task.  When an employee or contractor leaves, or threatens to leave, the names and contact details of clients assume supreme value. The fear is that this confidential information will fall into the hands of a competitor or the departing employee or contractor will use it for their own gain.

The first question is whether there were appropriate safeguards for this information during the employment or contractual relationship: for example, were client details password-protected and only imparted to employees or subcontractors under an express obligation of confidence, such as a confidentiality agreement?  Were the employees only allowed to store client information on company-issued mobile phones or had their client relationships become enmeshed in their social media?

However, what happens if there is a dispute and these client lists are attached to an Affidavit, putting them into the public domain and into the hands of a competitor?  A recent decision of the New South Wales Court of Appeal demonstrates that simply attaching the client details to an Affidavit is enough to ‘let the cat out of the bag’ and was fatal to the case. 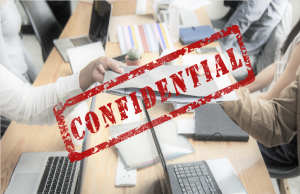 In the case at hand, Mr Isaac was engaged by Dargan Financial as a sub-originator (mortgage broker), submitting and managing loan applications on behalf of various clients. Soon after, Mr Isaac began working for RAMS Financial Group.  He then tried acted a loan writer for nine persons who had existing loans with Dargan.  Mr Isaac admitted to retaining and using a list of Dargan’s clients downloaded from a client management database, and to soliciting clients of Dargan and accepting approaches from the existing Dargan clients.

Fortunately, there was a written Sub-Origination Agreement between Mr Isaac and Dargan containing a number of confidentiality provisions, as well as a non-solicitation restraint and non-interference restraint.

Dargan brought proceedings in the New South Wales Supreme Court, alleging breach of the confidentiality provisions, breach of an equitable obligation of confidence, and breach of the restraint provisions.

Mr Dargan argued that the downloaded list lacked the necessary quality of confidence because the information it contained had entered the public domain, and that the two restraints were unreasonable and accordingly unenforceable.

At first instance, Sackar J found in favour of Dargan and granted an injunction permanently preventing Mr Isaac from disclosing or using the client list, and restraining Mr Isaac for several months from approaching any person for any purpose associated with the arrangement of finance or loan origination.

Mr Isaac’s appeal was, however, allowed in part.

Was the restraint in the agreement enforceable?

On the issue of the restraints, Gleeson JA (with whom Bathurst CJ and Beazley P agreed) found initially that the non-interference restraint had not been breached, but then agreed with the trial judge that the non-solicitation restraint had been breached and was not unreasonable (at [132]). It was noted that Dargan had a ‘commercial interest’ in protecting its business from the financial impact of a client refinancing their loan with another lender, and in preserving its clients’ confidential information (see [110]–[123]). These interests were reasonably protected by the restraint on Mr Isaac, considering his substantial involvement with each client (which suggested that even a mild solicitation could be enough to deprive Dargan of business) and the potentially compromising effect of his total access to Dargan’s client lists and client details.

On the issue of confidentiality, Gleeson JA first found that the trial judge had erred in his construction of the expression ‘Confidential Information’ as it appeared in certain clauses of the agreement. Rather than including all of the information generated by Mr Isaac in the course of activities referred to in the Agreement, the expression included only such information as was confidential at law and had regard to, or was related to, Dargan’s business (see [137]–[148]). In then determining whether the client lists constituted confidential information, his Honour considered the extent to which the information was ‘known outside the business’ (a reference to Del Casale v Artedomus (Aust) Pty Ltd [2007] NSWCA 172).

On this point, Mr Isaac argued:

However, Gleeson JA dismissed these arguments, agreeing with the trial judge in each case (at [152]–[157]). This was because the lists stored on the software database were not available to the public at large or to competitors — access was limited and password protected. In the case of the details stored on the phone, this information had been imparted subject to an obligation of confidence and could not be openly available.

Finally, the clients appearing on Mr Isaac’s Facebook page were limited in number and, in any case, had only their names displayed — this did not amount to Dargan’s client lists or client details entering the public domain.

The cat was out of the bag

However, lastly, on the matter of the injunctive relief, Gleeson JA reversed the finding at first instance. It was held that the client list entered the public domain after it was tendered in open court by Dargan and not thereafter protected by any confidentiality order — once the information became public knowledge in this way, equity would refuse to intervene to protect it (see [167]–[174]). Moreover, no particular list or content in any list had been specifically identified in the course of proceedings as requiring protection by injunction. This uncertainty itself warranted refusal of such relief (see [178]–[179]).

The case ultimately highlights the importance of drafting proportional restraint provisions and protecting client lists at all times.  This is especially the case when a dispute arises. Even if the confidentiality agreement and methods of protecting client lists survive scrutiny, just attaching the client details to an Affidavit, without first seeking a Court-order protecting the information, could be fatal to the case.